“Confessions of an Israeli traitor – The occupation is destroying our own society, too”

Confessions of an Israeli traitor

The occupation is destroying our own society, too

By Assaf Gavron October 23
Assaf Gavron’s latest novel, “The Hilltop,” is out in paperback. 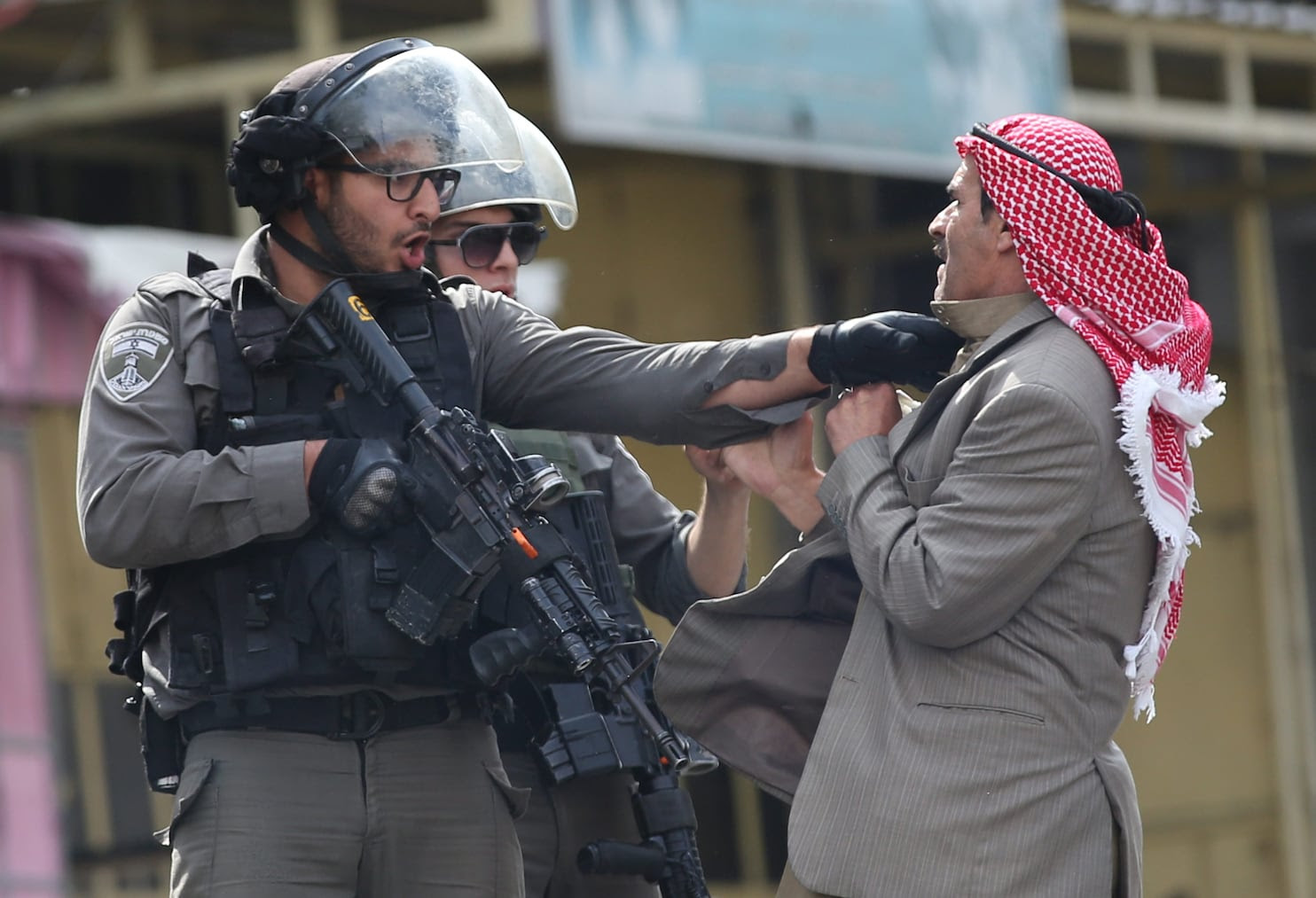 A Palestinian argues with Israeli policemen during clashes in the West Bank city of Hebron this month. (EPA/ABED AL HASHLAMOUN)

I was an Israel Defense Forces soldier in Gaza 27 years ago, during the first intifada. We patrolled the city and the villages and the refugee camps and encountered angry teenagers throwing stones at us. We responded with tear gas and rubber bullets.

Since then, the conflict between Israelis and Palestinians has seen stones replaced with guns and suicide bombs, then rockets and highly trained militias, and now, in the past month, kitchen knives, screwdrivers and other improvised weapons. Some of these low-tech efforts have been horrifically successful, with victims as young as 13. There is plenty to discuss about the nature and timing of the recent wave of Palestinian attacks — a desperate and humiliated answer to the election of a hostile Israeli government that emboldens extremist settlers to attack Palestinians. But as an Israeli, I am more concerned with the actions of my own society, which are getting scarier and uglier by the moment.

The internal discussion in Israel is more militant, threatening and intolerant than it has ever been. Talk has trended toward fundamentalism ever since the Israeli operation in Gaza in late 2008, but it has recently gone from bad to worse. There seems to be only one acceptable voice, orchestrated by the government and its spokespeople, and beamed to all corners of the country by a clan of loyal media outlets drowning out all the others. Those few dissenters who attempt to contradict it — to ask questions, to protest, to represent a different color from this artificial consensus — are ridiculed and patronized at best, threatened, vilified and physically attacked at worst. Israelis not “supporting our troops” are seen as traitors, and newspapers asking questions about the government’s policies and actions are seen as demoralizing.

Since the start of last year’s Gaza war, there have been several incidents of anti-leftist violence to go along with the attacks aimed at Palestinians: Left-wing protesters were assaulted at antiwar demonstrations in Tel Aviv andHaifa last summer, during the war; left-wing journalist Gideon Levy of Haaretz was accused of treason by a Knesset member, a crime that during wartime is punishable by death. He’s since hired bodyguards. The comedian Orna Banai lost an advertising job after an interview in which she expressed horror over Israeli actions against Palestinians. This month, people in Afulaattacked an Arab correspondent for an Israeli TV network and his Jewish crew while they reported on a stabbing attack. A new bill in the Knesset encourages the thought police by turning away visitors to Israel who have supported the movement to boycott companies profiting from the occupation. On Friday, a masked Jewish settler attacked the president of leftist group Rabbis for Human Rights in a Palestinian olive grove in the West Bank.

On social media, the gloves are taken off, social courtesies abandoned, hatred rears its ugly head. Facebook pages calling for violence against left-wingers and Arabs appear frequently, and even when they’re taken down, they pop up again in one guise or another. Any sentiment not aligned with the supposed consensus is met with a barrage of racist vitriol. One Facebook group calling itself the Shadow Lions discussed how to disrupt a wedding between an Arab and a Jew, posting the groom’s phone number and urging people to call and harass him. On Twitter and Instagram, hashtags like #leftiesout and #traitorlefties abound. Film director Shira Geffen, who asked her movie audiences for a moment of silence to respect Palestinian children killed in an Israeli offensive, was flayed across Israeli social networks. “Shame,” a new and brilliant play by actress Einat Weitzman, brings to the stage a selection of the hateful comments she received after wearing a T-shirt bearing the Palestinian flag. One example from the play: “If the baby that was murdered was yours I wonder which flag you would put on yourself. Now step on it and get your ugly head back to your tiny apartment and bury yourself from the shame until you die there alone and maybe in your funeral we will ask the Jihad to read verses from the Koran.”

In this latest round of fighting, the volume has been turned up still another notch. While the knife attacks are going on, my family and I are in Omaha, where I’m teaching for the semester, and what I hear and read from Israel leaves me appalled. Again led by politicians from the right (with the perplexing support of members of the supposed opposition, such as Yair Lapid), then circulated by the sensationalist mainstream media, there has been a unified demonization of Palestinians and Israeli Arabs. One recent pollby the newspaper Maariv found that only 19 percent of Israeli Jews think most Arabs oppose the attacks. This past week, the trend reached its absurd peak, with Prime Minister Benjamin Netanyahu’s ridiculous claim that Hitler decided to annihilate the Jews only after being advised to do so by Jerusalem Mufti Haj Amin al-Husseini, the leader of Palestinian Arabs at the time. (Israeli Twitter was full of jokes and memes about the speech, which one image in circulation dubbed “Hitlerious.” Even for Netanyahu’s supporters, apparently, this was too much.)

There have been calls to kill attackers in every situation, in defiance of the law or any accepted rules of engagement for the military. Lapid, for example, said in an interview, “Don’t hesitate. Even at the start of an attack, shooting to kill is correct. If someone is brandishing a knife, shoot him.” Minister of Public Security Gilad Erdan also gave his blessing to that notion. And the head of the Jerusalem police department, Moshe Edri, announced, “Anyone who stabs Jews or hurts innocent people is due to be killed.” Knesset member Yinon Magal tweeted that authorities should “make an effort” to kill terrorists who carry out attacks.

Such sentiment has led to incidents like the death in East Jerusalem of Fadi Alloun, suspected of a knife attack but shot by police as they had him surrounded. Sometimes, it backfires: This month, a Jewish vigilante near Haifa stabbed a fellow Israeli Jew who he thought was an Arab. Late Wednesday, soldiers killed an Israeli Jew whom they mistook for a Palestinian attacker.

The low point (so far) was last Sunday night’s lynching of 29-year-old Eritrean asylum seeker Haftom Zarhum, mistakenly identified as a perpetrator of a terrorist attack in Beersheba. Zarhum was shot by a security guard then beaten to death by a mob of passers-by in a predictable response to the incitement from our own politicians to kill as revenge. And the increasingly intolerant, boiling, racist tone of the Israeli conversation is — there is no other way to put this — a result of 48 years of occupying another people: of Israelis receiving a message (or at least understanding it as such) that we are superior to others, that we control the fate of those lesser others, that we are allowed to disregard laws and any basic notions of human morality with regard to Palestinians.

The cumulative effect of this recent mindless violence is hugely disturbing. We seem to be in a fast and alarming downward swirl into a savage, unrepairable society. There is only one way to respond to what’s happening in Israel today: We must stop the occupation. Not for peace with the Palestinians or for their sake (though they have surely suffered at our hands for too long). Not for some vision of an idyllic Middle East — those arguments will never end, because neither side will ever budge, or ever be proved wrong by anything. No, we must stop the occupation for ourselves. So that we can look ourselves in the eyes. So that we can legitimately ask for, and receive, support from the world. So that we can return to being human.

Whatever the consequences are, they can’t be worse than what we are now grappling with. No matter how many soldiers we put in the West Bank, or how many houses of terrorists we blow up, or how many stone-throwers we arrest, we don’t have any sense of security; meanwhile, we have become diplomatically isolated, perceived around the world (sometimes correctly) as executioners, liars, racists. As long as the occupation lasts, we are the more powerful side, so we call the shots, and we cannot go on blaming others. For our own sake, for our sanity — we must stop now.