The prime minister proved that he has not lost his penchant for hatred and inciting against minorities, for seizing every tragedy to make political hay. It was low, even by his own standards. 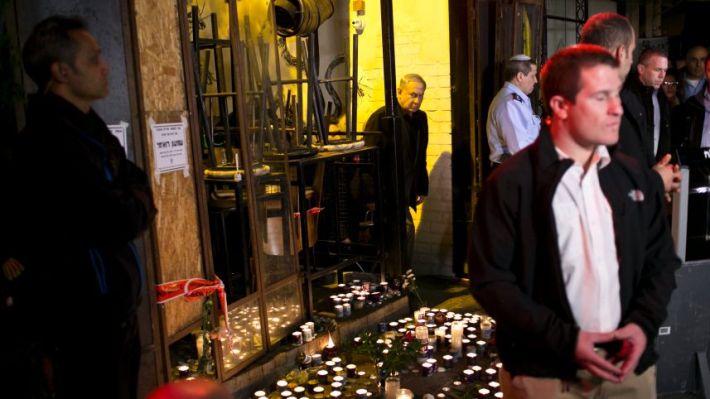 Netanyahu at the site of a shooting that killed two and wounded seven in Tel Aviv, December 2, 2016.

Benjamin Netanyahu is no stranger to Tel Aviv’s Dizengoff Street in a state of post-traumatic stress. On the morning of October 19, 1994, a suicide bomber blew up a No. 5 bus on the trendy, beloved thoroughfare, about 100 meters from Friday’s shooting. In one of the worst terror attacks the city has ever seen, 20 people were killed and over 30 were wounded. Even before all the bodies were removed from the destroyed vehicle, then-opposition leader Netanyahu arrived on the scene, bodyguards in tow. He blasted then-Prime Minister Yitzhak Rabin, accusing him of personal responsibility for the attack, together with then-Palestinian President Yasser Arafat.

Twenty-one years have passed, an eternity. Netanyahu has been prime minster for 10 of these years. For the past seven years, he has been solely responsible for the security of Israel’s citizens. Our leader’s hair has turned white, and presumably he has grown in wisdom, experience and judgment. But he has not lost his penchant for making generalizations, for spreading fear and hatred and for inciting against minorities; for pouncing on every opportunity, every tragedy, to make some political hay and to reap an instant electoral harvest.

Netanyahu’s speech on Saturday — at the scene where two young men were shot to death and 10 more people were wounded, with dozens of memorial candles flickering at his feet — was Bibi at his worst. Not containing, not calming, not leading — a small politician. He was not ashamed to mention — presumably on orders from his wife, who was recovering at home from being questioned by the police fraud unit for hours on Thursday — her investigation session – that their two sons are around the same ages as the victims. He only forgot to mention that as the prime minister’s children, Yair and Avner are followed by a security detail at all times. They, thank God, are protected.

Everything else he said was a harsh, shameful, near-racist diatribe against Israel’s Arabs. He described the whole community, as gun-toting criminals and potential terrorists. “I will not accept two states within Israel,” Netanyahu said. Israel, he said, cannot be a lawful state for some and lawless for others, where “there are enclaves without law enforcement.”

He’s been saying the same inflammatory things for seven years. Who’s stopping him from eliminating the illegal guns in Arab communities? Who’s stopped him from “drawing up a very expensive plan to uproot the phenomenon, to build more police stations in Arab communities, to hire more police officers,” as he vowed to do Saturday? Who’s stopping him from imposing law and order? Opposition leader Isaac Herzog and his Zionist Union colleague Tzipi Livni? The left-wing nongovernmental organization Breaking the Silence? Join Arab List MK Ahmad Tibi? President Reuven Rivlin? And has he launched a broad plan to clear weapons from the problematic settlements in the wake of the terror attack in Duma, which was allegedly perpetrated by Jewish youths living on the West Bank “hilltops”?

His sweaty attack last night on the whole Arab public was cynical and shameless, even by the low standards to which he has accustomed us over the years. One might infer from his remarks that since the shooting, which was perpetrated by a young, apparently unstable, man from the Wadi Ara town of Arara, the entire “sector” has been celebrating the murder and calling for similar acts.

It is precisely the opposite. The suspect’s father, a volunteer in the Israel Police for the past 30 years, notified the authorities after recognizing his son in security videos on television. All of Arara’s leaders condemned the act and disavowed the suspect. There were no calls or acts of solidarity with the crime in other Arab communities in Israel.

Rather, for the past 110 days Israel has been in the clutches of a terror that Netanyahu and his cabinet ministers have not been able to end. Most of the perpetrators have come from the eastern part of “forever united” Jerusalem, according to the empty saying trumpeted by Netanyahu and company for a generation. With few exceptions, the rest of the Arab public has not joined this bloody violence. Even the outlawing of the Northern Branch of the Islamic Movement in Israel was accepted relatively quietly. So why the hell was it so important for Netanyahu to ignite this strange, wicked fire against his own citizens? The answer seems clear. He came to take a ride, as he did back in October 1994. Reconciliation and reassurance aren’t his thing.

Netanyahu looked like a stranger in Tel Aviv. The sanest, most tolerant, liberal and open city in the country found it difficult to digest his horror show. Young men and women, friends of the victims in the attack, have given many interviews since the events of Friday afternoon. They, who saw the terrible scene with their own eyes, spoke calmly and without hatred. They did not spit their words. Of course, Mayor Ron Huldai also maintained sanity. Until Netanyahu came for a visit. He stood in a dark place, where two young people had been murdered, and coolly incited against one-fifth of his country’s population.

The murderer has not yet been caught. Senior police officials are keeping silent on orders from their new commissioner, who emerged from the basements of the Shin Bet security service. For 110 days, Israel’s citizens, especially in Jerusalem, feel exposed and unsafe under the leadership of “Mr. Security,” and Netanyahu is playing politics.
Yossi Verter